In a tweet published on his official account, the Bahrain’s Foreign Minister Khalid bin Ahmed Al Khalifa, wrote that Iran has no real appreciation for the suffering of the Palestinian people. Tehran is only focused on the survival of the terrorist organization Hezbollah. In another tweet, few minutes after, Khalid bin Ahmed Al Khalifa added that in any case, “the Islamic Republic will not last”.

In what appeared a dangerous move which could spark new tension, the Arab media have published a video of the Iraqi shia commander Sheikh Amin Qais al-Khazali in southern Lebanon, very close to the Israeli border (ten kilometers from the Golan Heights). Sheikh Amin Qais al-Khazali is the commander of the Iraq shia militia Asaib Ahl al-Haq, financed and equipped by the Iranian Quds Force and part of the Popular Mobilization Forces. In the video, it is possible to see al-Khazali with a commander of Hezbollah and, speaking to the phone, saying that he is “full readiness to stand together with the Lebanese people and the Palestinian cause”. The Lebanese Government was not informed of this visit, which indicates another time its incapability (and the incapability of the Lebanese Army) to control the State’s territory.

Lebanese pro-Hezbollah newspaper al-Akhbar, writes that Samir Geagea is behind the resignation of Saad Hariri. In September 28, Geagea visited Saudi Arabia and met with King Salman. In that meeting, Salman expressed his commitment to confront Iran and Hezbollah, helping also Saad Hariri and the financial crisis of Lebanon. Geagea answered that Hariri was not the right person to confront Iran, because he had an agreement with President of Lebanon Aoun, and also meets once a week the political advisor of Hassan Nasrallah, Hussein Khalil. After the words of Geagea, Saudis started to think about Bahaa Hariri – elder brother of Saad – as the Sunni figure which could lead the confrontation.

Leaving Saudi Arabia, Samir Geagea went in Australia, where he started to attack directly Saad Hariri, accusing his Government to push for a “normalization of the relations with Syrian regime”. When, in October 2017, the Lebanese Government decided to appoint Saad Zakhia as new Ambassador of Lebanon in Syria, the Ministers of Lebanese Force declared their reservation to the Government’s decision.

In the plan to promote the figure of Bahaa Hariri, also former Lebanese Minister of Justice Ashraf Rifi, played a role: he met Bahaa Hariri in Monaco, passing through Milan, to dispel suspicions. Rifi returned in Beirut on Saturday – passing always through Milan – the same day of Hariri’s resignation. The next day, Bahaa Hariri travelled from Monaco to Riyadh. Yesterday, broking the silence, Bahaa Hariri spoke with the Associated Press (from Monaco), supporting the resignation of his brother, praising Saudi Arabia and attacking Hezbollah. 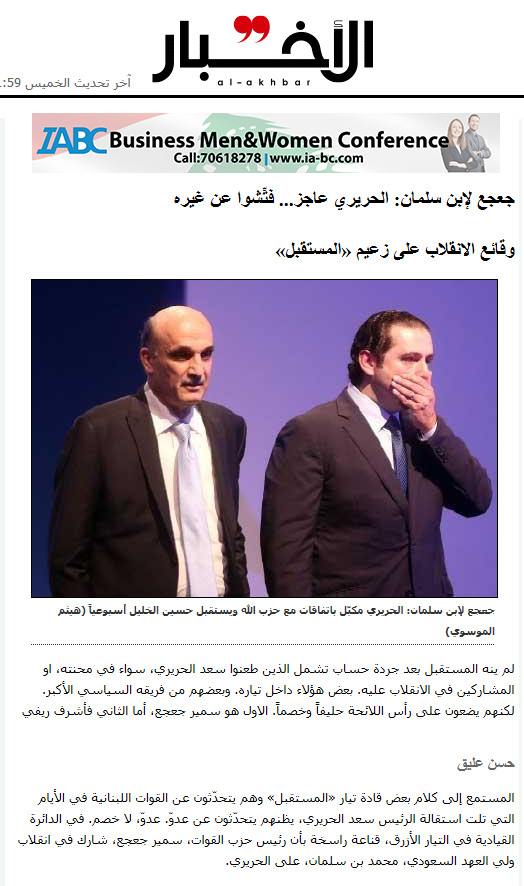 The website Amad News writes that the real reason of the resignation of Saad Hariri as Prime Minister of Lebanon, is the result of the threats of officials of the Iranian regime. In particular, Hariri decided to resign after a meeting that she had in Beirut with Ali Akbar Velayati. In this meeting, Velayati asked to Hariri to support openly Hezbollah, or he would reveal contacts of the Future Movement with the Syrian Ahrar al-Sham. More, he said that they will reveal contacts between the Future Movement and Israel. Amad News added that Velayati, while threatening the former Lebanese Premier, said to him “if you will not express the support for Hezbollah, your father’s end is awaiting you Saad Hariri refused to express his public support for Hezbollah, travelled to Saudi Arabia and decided to resign. 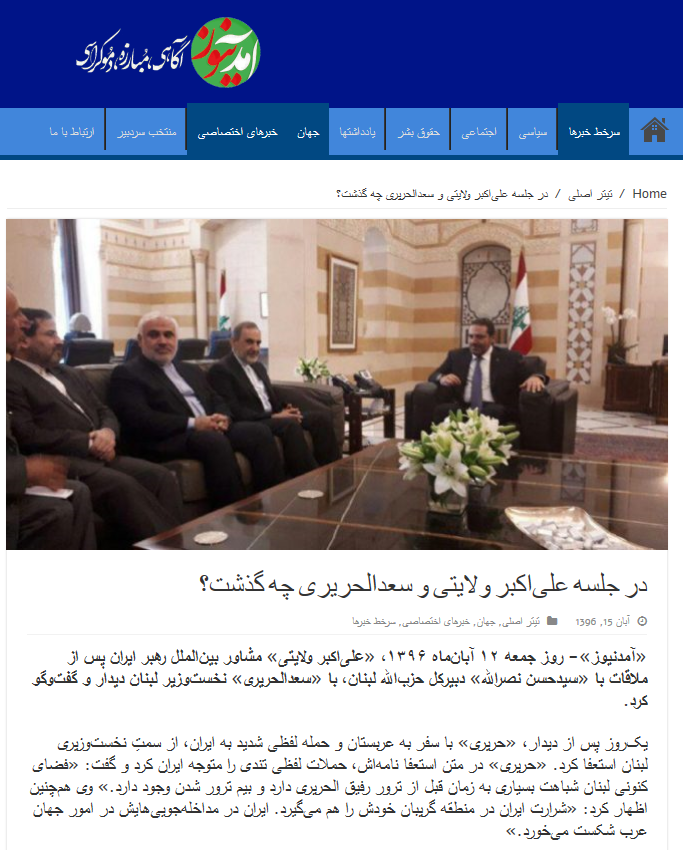 Below four videos about the huge protest held in Tehran, few days ago: from all Iran arrived in the capital thousands of people, in order to protest against the corruption of the financial institutions, especially the one connected to IRGC and Hezbollah. People chanted slogans against the regime, against the Central Bank, against Rouhani and also against the Iranian presence in Syria.

The US think tank Foundation for Defense Democracy (FDD), has published a report about who finances the Lebanese terrorist organization Hezbollah. The firs financer, as well known, is Iran, which gives around $ 800 million every year. Another financer is Venezuela, who facilitates the drug trafficking of Hezbollah, supported also by Shia communities in America Latina. But, between who gave money to the Party of God, there is also Qatar, who gave to Hezbollah $ 300 million in 2009. FDD denounces that Hezbollah used the Lebanese bank system for its money laundering, especially to “clean” the money received from the drug trafficking. 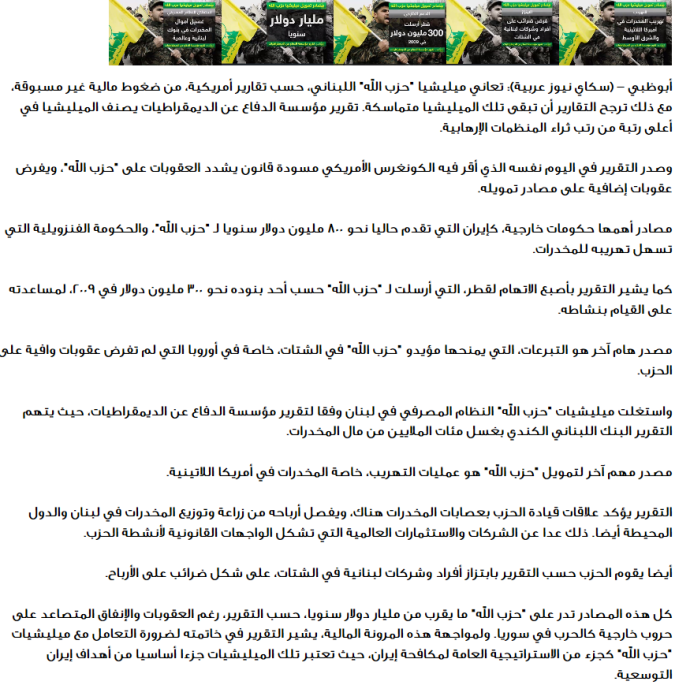 Speaking in the annual event in the occasion of the preparation of the Ashura, the Secretary of Hezbollah Hassan Nasrallah, revealed that he was the person who convinced the Iranian Supreme Leader, to intervene in Syria. It seems that, meeting Khamenei in Tehran, Nasrallah warned him that the end of the Assad’s regime, will mean not only the fight in Hermel, Baalbek, Dahiya, Ghazieh and Bekaa, but also inside Iran, in particular in areas like Kerman, Khuzestan and Tehran.
The words of Nasrallah remind what was said by IRGC Vice Commander, Hossein Salami, few months ago. Speaking in a TV interview – see the video in Farsi on the top – Salami said that Iran decided to act in Syria, in order to defend its foothold in the Mediterranean region. Because, losing Syria, will mean losing the chain which connects the front between Iran, Syria, Lebanon and Palestine. 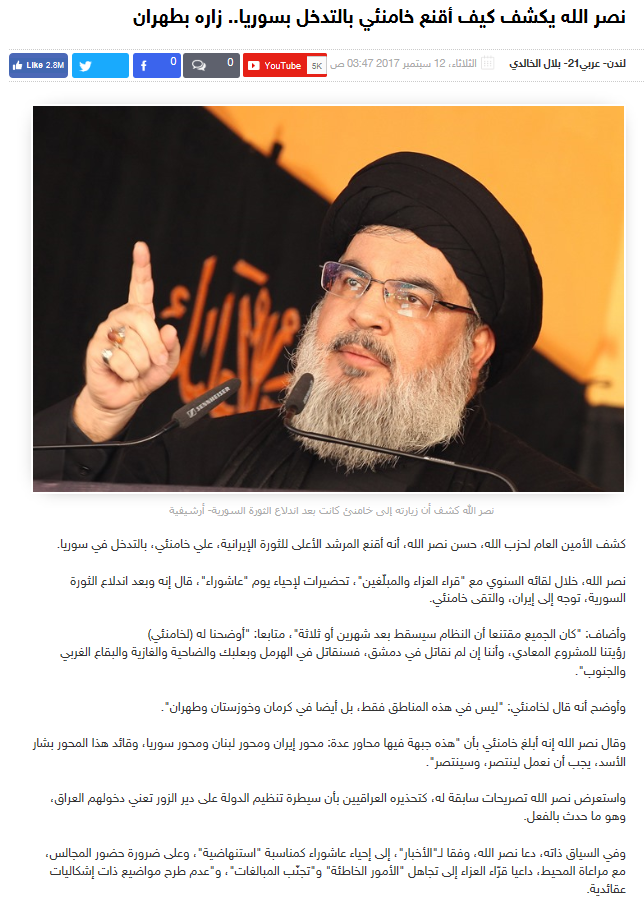 The deputy chairman of Hamas political bureau, Moussa Abu Marzouk, met in Lebanon with the Secretary of Hezbollah Hassan Nasrallah. During the meeting, the two agreed on strengthening the relations between the two terrorist organizations. The meeting happened on Thursday evening in Lebanon’s capital Beirut. Abu Mazouk arrived in Beirut after visiting Egypt, where he met with Yahya Sunwar – the head of Hamas in Gaza – the chief of the Egyptian intelligence Maj. Gen. Khaled Fawzy. It seems that, during the meeting, not only Abu Marzouk asked to Nasrallah to receive more money and training from Iran, but he also asked to Nasrallah to host in Lebanon the representatives of Hamas expelled from Qatar. 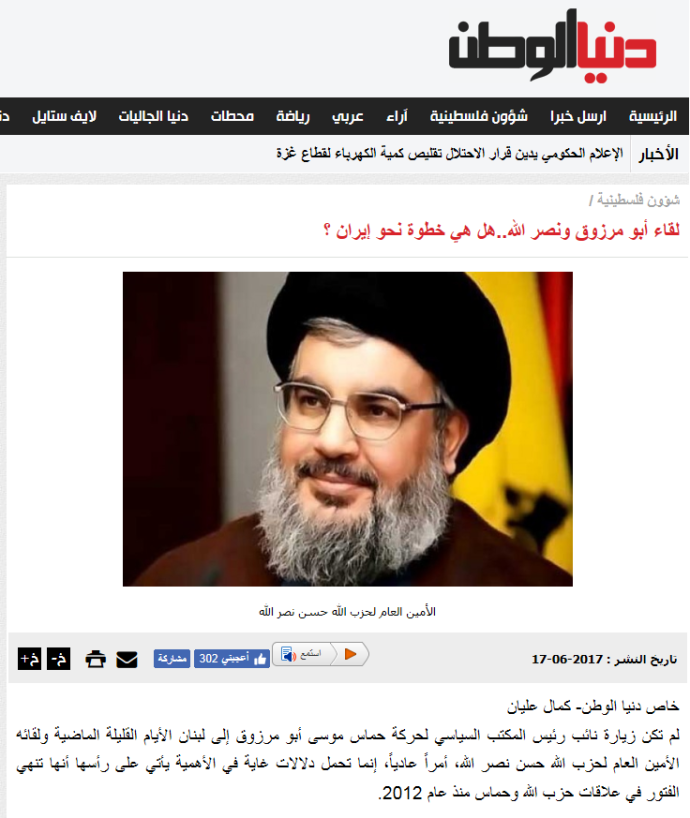 In an interview given to the reformist journalist Hussein Dehbashi – and published also on Youtube – the famous Iranian filmmaker Mohammad Nourizad, attacked again the regime and its foreign policy. In the interview, Nourizad said that, before the Iranian revolution of 1979, the Arabs never interfered in the Iranian internal policy. He said that it was the decision to export the Shiism, which caused the creation of the Sunni terrorists organizations like al-Qaeda and Boko Haram. Nourizad attacked also the Iranian intervention in Syria and described Hezbollah as a terrorist organization and its Secretary Hassan Nasrallah, as a murderer. For the Iranian filmmaker – well known for his anti-regime positions – the export of arms to Hezbollah for the fights in Syria is “haram”. Nourizad also said that the Saudi King Salman is more wise, intelligent and popular than thousands of Iranian leaders.

An anonymous source of the al-Qassam Brigades – the armed wing of Hamas – said that during the “Sixth International Conference in Support of the Palestinian Intifada” (held in Tehran in February 2017), the Iranian regime has granted to Hamas a financial support of 27 million dollars. Practically, the money arrived to Hamas via Hezbollah, after a meeting organized in Beirut.

The relations of Iran with Hamas it’s ambivalent: for one side, Tehran has good relations with leaders like Mahmoud al-Zahar and the new head of Hamas in Gaza, Yahya Sinwar. Both of them considered hardliners. On the other side, Iran has negative relations with political leaders of Hamas like Khaled Meshaal, who was the head of the Political Bureau until few weeks ago (in these days Isma’il Hanyeh was elected has his successor).

Recently the Iranian regime has criticized the approbation of the new Chart of Hamas in which, the media reported, the Palestinian terrorist group recognized Israel between 1967 borders. After the criticism, the Hamas’s representative in Iran Khalid Qaddoumi clarified that Hamas does not recognize Israel and remains committed to the liberation of Palestine “from the sea to the (Jordan) river”.

Hamas it seems divided inside, between a maximalist line – which wants to maintain close ties with Iran and Hezbollah – and between a “political” line, which is waiting for Trump’s action to rebuild strong ties between United States and the Sunni Arab countries. 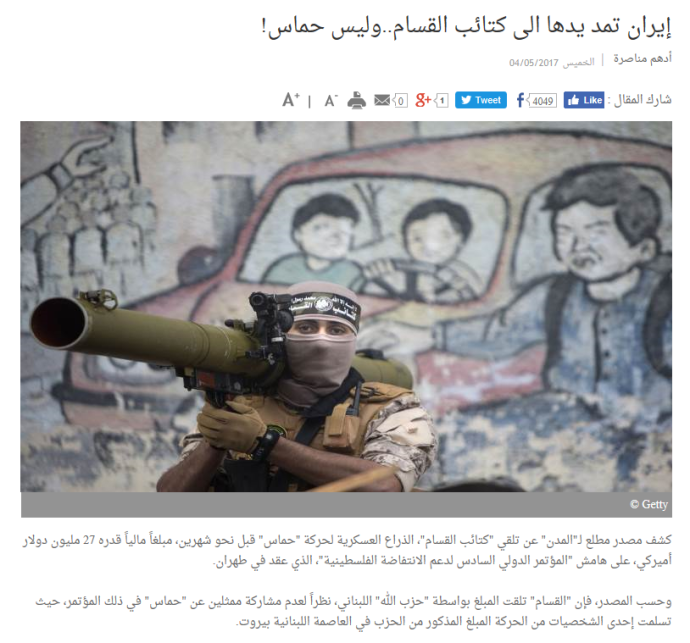